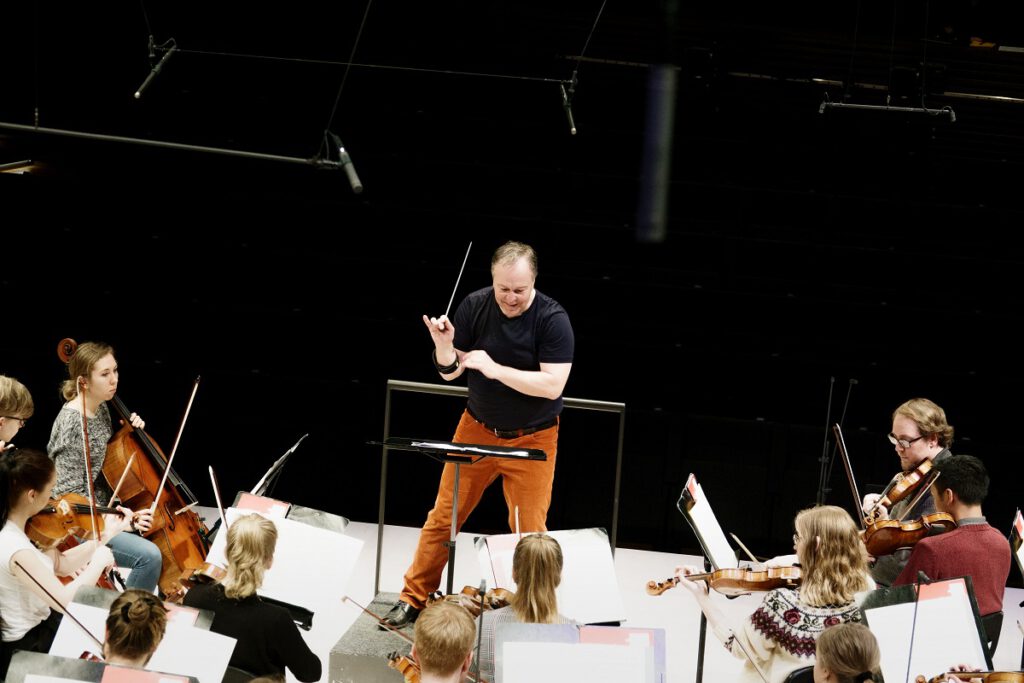 Sakari Oramo is one of Finland’s international star conductors and is known for his extended engagements with orchestras and for his sense of responsibility. During the Year of the Coronavirus, his duties with his orchestras in London and Stockholm were suspended almost completely, but his new job as Professor of Orchestral Training and Orchestra Conducting with the world-famous conducting class of the Sibelius Academy has kept him busy. Here, he is responsible not only for Finland’s reputation in orchestra conducting but also for our standard of orchestral playing, which has recently become a cause for concern.

I reach Sakari Oramo via a video link at his villa in Kokkola, but he has not fully retreated from musical metropolises to remote work. Only the day before, he conducted a corona-typical gig with the Ostrobothnian Chamber Orchestra. “I don’t even remember which guest conductor it was who couldn’t make it this time, but I happened to be available and was happy to pitch in, as I know the orchestra well.”

The concert was streamed, and 20 people were allowed in the audience. Oramo notes that these tickets were snapped up immediately. “Fortunately, people are still hungry for music!”

Oramo admits to having been distressed in early 2020 when concerts were cancelled first by the Royal Stockholm Philharmonic and then by the BBC Symphony Orchestra, and suddenly there was no more commuting around the world. “The continuing uncertainty was nerve-wracking. But now I’ve adapted, and last-minute changes no longer change the way I work or drive up my stress levels,” says Oramo.

Oramo’s work did change in January 2020, however, as he took up the chair of Orchestral Training and Orchestral Conducting at the Sibelius Academy of Uniarts Helsinki, and now he is responsible for the most famous music class in the country. The professorship demands his constant attention, particularly in late spring with preparations for the next academic year and the running of entrance examinations. The coronavirus pandemic has made the work very different from what Oramo was expecting, but he has never had any doubt about his policy or his motivation:
“The orchestral conducting training has been going well. The young people graduating from that class are immediately able to launch an international career or to find work in Finland,” Oramo says with satisfaction. “It was clear from the first that I wanted to raise our sights even further.”

By this, Oramo meant reducing the size of the conducting class even further, so that he would be able to give individual feedback. This will allow strengths in the students’ personalities to flourish while helping them improve on their weaknesses. The principal legacy of Jorma Panula, the legendary founder of the conducting class, is that each student gets plenty of podium time with a dedicated rehearsal orchestra, and Oramo notes that the importance of this has only increased.

“But the musicians in that orchestra have to be paid, and now that we are facing budget cuts, I’ve sought to engage in collaboration with professional orchestras,” says Oramo. After having worked on technique, interaction skills and score reading in a classroom setting, students can be ready to test their competence in front of a professional orchestra.

In January 2021, the conducting students prepared a concert of their own for the concert series of the Ostrobothnian Chamber Orchestra, and there have been brief periods working with the Helsinki Philharmonic and the Finnish Radio Symphony Orchestra. Oramo says that the concept has proved useful: “The rehearsal orchestra will play exactly like you conduct them, but a professional orchestra is a machine with a settled routine of its own. Then a student can be like, why won’t they play what I’m showing them?”
This is where Oramo can provide support.

“Students have to discover in themselves what they want to achieve, but a teacher can help them understand how to get there.”

Sakari Oramo conducting Sibelius-Academy students at the final concert of Sibafest in 2020.
Photo: Sibelius Academy of the University of the Arts Helsinki/Maija Astikainen

On the other hand, Oramo has also increased the time used for individual tuition in the orchestra conducting class. “When I ask a student to conduct a couple of measures with no instrument players present, we can address fine details in their technique. There’s no time for that sort of thing in working with an orchestra when the music just flows.”

It is easier to address weaknesses when peer pressure is absent, although Oramo also stresses that the conducting students can learn a lot from each other, as long as the teacher keeps the interaction constructive. “I want a student to gain self-confidence in my class, not lose it.”
Oramo has never had any pedagogical studies in the course of his career, but he has developed his abilities in previous minor teaching tasks, through closely observing the competence and behaviour of students. And when he describes the rewards of a pedagogical presence, I can feel the warmth of his smile radiating across the video connection:
“I’ve conducted Schumann’s First Symphony a lot, but when I see how students discover the music afresh and also come up against its challenges, it’s like reliving the early days of my career,” says Oramo. “I don’t see teaching as a means for maintaining a fresh approach for myself, but that’s what happens.”

Sometimes conductors fly straight out into the world from the orchestra conducting class, but orchestras in Finland have become concerned that instrumentalists graduating from the Sibelius Academy are not doing so well in orchestra auditions compared to foreign candidates. Oramo’s professorship includes orchestral playing, so he is obliged to take responsibility for this too.

“It’s getting worse,” says Oramo. “Finnish students often don’t even do well in the Sibelius Academy entrance examinations, meaning that they don’t get the chance to be trained here.”
Oramo identifies causes and potential solutions for this at the basic level of music education: “We’ve ended up in a situation where there’s just not enough ambition for musical competence. I’m not harking back to the pedagogical style of olden times, because the results attained then were due to the efforts of enthusiastic individual teachers just like today. But do we even allow teachers to be ambitious today? Or is the system just geared towards doing the bare minimum to pass examinations, instead of propelling students toward a professional level of competence?”

Challenges at the basic level of education can only be addressed by Oramo through authoritative opinions, but at the Sibelius Academy he can influence competence in orchestral playing in practice. Here, too, his approach is clear: “Orchestral training has been running steadily and has developed into a sort of calling card for the Sibelius Academy,” Oramo explains. “And when the university administration invites our symphony orchestra to perform at all sorts of events, the pedagogical function tends to get sidelined.”

”It was a rude awakening to discover that the coronavirus pandemic has plunged the arts into dire straits, as decision-makers seem incapable of understanding how important this industry is in terms of both financial impact and employment.”
Sakari Oramo

Oramo intends to streamline the training for orchestral musicians by creating a pathway for orchestral competence at the Sibelius Academy that is clearly mapped out from the start and pedagogically efficient. The aim is to focus not just on repertoire but also on working life skills. Finnish orchestras have expressed the wish that this kind of tacit knowledge should be verbalised for students before they even go out to apply for jobs in orchestras.

“Beginning with simple things like how people are seated in an orchestra and how you should interact with your section and your principals.”
Launching a streamlining project at Finland’s only university-level music school, sounds like a tall order, because the Sibelius Academy often comes across as chaotic and bureaucratic, but Oramo has no illusions about everything running as smoothly as when he is appearing as a guest conductor.

“Because I want to take responsibility, to plan things and to improve things, it’s inevitable that I’ll have to do the administrative stuff as well.”

Long and important engagements with orchestras

From this summer, Oramo will have more time to devote to being a professor, as his tenure as Chief Conductor of the Royal Stockholm Philharmonic comes to an end after 13 years. Long engagements with orchestras are typical for Oramo, but he also knows when it is time to go. The grand Sibelius cycle planned for the end of the spring season in Stockholm felt like the right occasion to bow out.

“I almost left Stockholm when I started in London, but then I realised that the Stockholm orchestra was much too important for me. I’ve found a sense of harmony and community there that’s rare in the music world these days,” says Oramo. “But now that I’m starting a new and very time-consuming job, it was time to say goodbye.”
He is not about to take up a position with another orchestra, but he will resume his duties as Chief Conductor of the BBC Symphony Orchestra once it gets going again after the pandemic.
“So there’s a Proms concert there on 11 September, for instance, and I’ll have to plan around that date, but everything is possible, since we have no idea yet what the audience rules will be like.”

A generation of decision-makers with no contact with classical music
Both actions and words indicate that Oramo is dedicated to long-term work in the service of classical music, and the pandemic has only served to crystallise his motivation.
“I grew up in a musical bubble, and when I was a student in the 1970s, I believed that the importance of classical music would become steadily more indisputable,” Oramo recalls. “But it was a rude awakening to discover that the coronavirus pandemic has plunged the arts into dire straits, as decision-makers seem incapable of understanding how important this industry is in terms of both financial impact and employment.”
Oramo surmises that the reason for this is that the present generation of decision-makers has grown up without any direct contact with classical music and that its appreciation has therefore eroded, gradually and imperceptibly.
Musing on this, Oramo arrives at the same solution as for the improvement of teaching for conductors and orchestra musicians: ambition.
“Society today is more advanced in many ways than in the 1970s, but the desire to always do things better that existed back then has disappeared, as many people are now just struggling to survive from one day to the next,” Oramo proposes. “The Finnish dream, as compared to the American dream, is that it is genuinely possible to reach the top from humble beginnings, for instance in classical music. The flip side of this is that everything degrades into mediocrity if we lack the ambition, the drive to do better.” 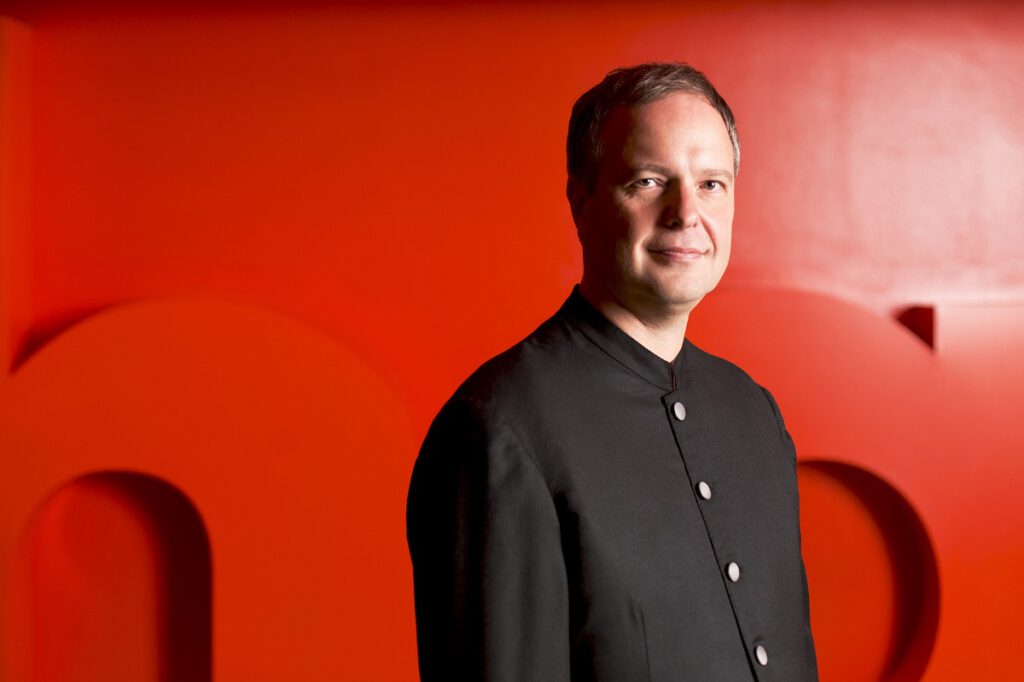